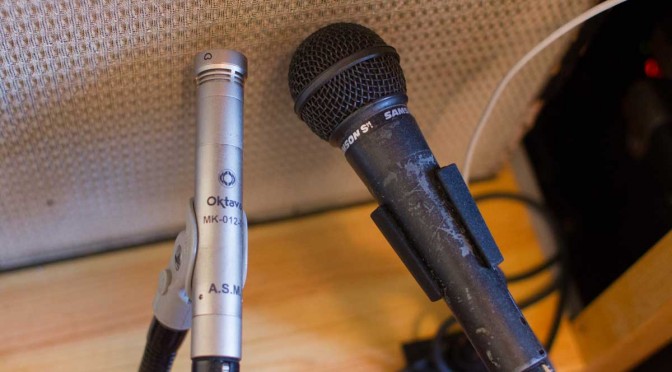 A while ago, I was asked what kind of guitar amp I use for Manwomanchild recordings. Of course, our guitar sound is due to a number of pieces of kit, not just the amp. In the interest of providing a complete picture, here’s a full gear guide to the Manwomanchild electric guitar sound: Fender Jazzmaster, ProCo Rat, MusicMan Sixty-Five, Vintage Celestion 30 Speaker, etc.

I play a Fender Jazzmaster…

Almost all of the electric guitars you hear on our records are this thing. It’s been slightly modified by the folks at Amherst Music House–I think they swapped out one of the pickups with a Duncan Quarter Pounder and changed something about about the switch wiring. It’s everything I would want from a guitar: easy to play, sensitive to dynamics, has a beautiful clean sound but works well with distortion. If I ever lost it, I would buy another in a heartbeat.

…which I plug into a ProCo Rat

This is the only effects pedal I actually use, and I don’t use it all that much. As a general rule, any solo that you hear me play will be a combination of this ProCo Rat and the distortion on the Music Man Sixty-Five. There’s considerable talk on message boards about how older ProCo Rats are somehow different and better from new ones. I don’t know if that’s really true. Mine is probably from the early ’90s.

…and that’s plugged into a Radial DI Box

After recording at Machines With Magnets, I picked up one of these. It has a DI “thru” output so that you can record both the output from your amp and the direct output from your guitar at the same time. This can be useful if you feel like you recorded the perfect take, but don’t love the amp sound you used (or just want to double it with another amp). In such cases, you can output your recorded DI track back to your amp and re-record it without having to replay anything. That being said, it occurs to me as I write this that we have never once done this. We do use the direct input for bass recording, though. The sound of my bass guitar is roughly 70% heavily compressed DI track, and 30% output from the amp.

I love this thing. All of the guitars on all of our recordings are done with this amp.  I bought mine off eBay about twelve years ago after seeing a photo of Television playing with similar one in the 70s (a stupid reason to buy gear, but it worked out well for me). One of the best things about it is that when the gain is turned up it’s extremely responsive to my playing style. It has a beautiful clean sound, but if you hit the strings hard it will get dirty in proportion to how hard you play. I went through a ton of amps before finding the right one for me. If I lost this amp, I would definitely by another.  This amp has both a bass and a regular guitar channel. The bass channel would probably be completely ludicrous to use live as an actual bass amp, but we do use it occasionally to add some coloration to our bass tracks.

…through a Tom Scholz Power Soak

This goes in between the amp and the speaker. It allows me to turn the amp up above 3 without shaking the old wooden floors here. There’s a lot of talk on message boards about how vintage tube amps only sound good when they’re cranked up to 8. I don’t know if that’s really true, but it can’t hurt, so we do it.

The Vintage 30 is a great recording speaker. Not much more to say about that. The weird homemade cab that I’ve been using for the past decade is something I found in the old AMVETS Thrift Store in Allston, MA. Don’t really know much about it except that it’s lined with some super gross fur on the inside.

When you don’t have a tremendous amount of cash to spend on gear, you can mask a multitude of sins by doubling up on things. Instead of mixing through one set of downmarket speakers, use two; instead of one mic for your guitar amp, use a couple of those as well, etc.  We record these both simultaneously on two different tracks along with a direct input track from the Radial DI box on a third. I then mix two or three of these to taste later. If I’m not into the tinniness of the Oktava, I turn it down a bit in the mix relative to the Samson. Speaking of which, there’s a lot of crazy debate online about these Oktava condenser mics. Some people say they’re secretly amazing mics being sold for pennies, other people say they’re complete shit, and still others claim they used to be amazing, but now they’re made by someone else and are indeed shit. If that’s the case, I don’t really know which version I have. Mine sounds decent on its own, but great when combined with the Samson S11. The S11 is just your standard SM58 clone. I do have an SM58 as well, but I like the S11 slightly more because I’m used to it.

OK. That’s pretty much it for the electrics. I’ll do another post next week about the acoustic and bass guitar sounds.