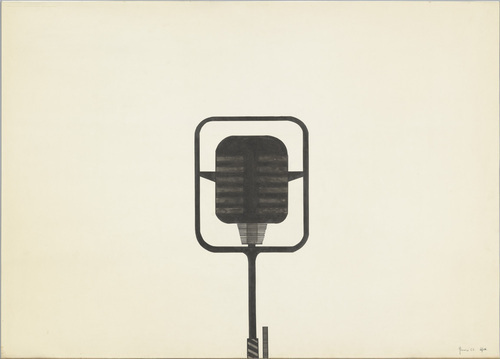 I just discovered the work of Alighiero e Boetti thanks to this post over at Little Paper Planes.  Here’s a sample from the MoMA archives:

See all of his MoMA stuff here. And his Wikipedia entry here.

It hardly needs the shout-out — it’s already totally famous — but credit where credit is due. This plain-jane blogspot blog is a vehicle for countless rants, free songs and shout-outs — not to mention dozens of beautifully curated classic rock “microMixes” — all from the mind of Bradford Cox, singer of Deerhunter and Atlas Sound. What really distinguishes this blog from most other musician blogs is not just the level of access and intimacy that we get into Bradford’s life and thoughts, but also his generosity. He gives away content left and right. I don’t know what his philosophy behind this is, but it really makes you think about what the internet could be. Instead of getting lost in some sort of weird pre-digital notion of copyright law or some valiant effort to protect his intellectual property (a pursuit that would in any case be in vain) he goes the other route: He gives most of his songs away for free. And he gains droves of fans in the process. Also Bradford’s voice is beautiful and the songs are just great so that doesn’t hurt either.

2. The Art of Ian Dingman

Yes, we’re finally getting around to writing about Ian Dingman. It feels like we’ve known about this man forever. We loved and bought his prints when they came out over at Tiny Showcase. We loved his sketches and his watercolors when they were commissioned and featured in countless magazines. And when he drew the artwork for the Criterion Collection re-issue of Bottle Rocket, well yeah, that was pretty awesome, too. Â  Time and again Dingman delivers. So by all means: Go to his website. Sign up for his newsletter. Buy his art.

1. The Art of Blake Suarez

We only just discovered Blake’s work this week and already we love it. Not only has he done tons of projects (stuff for small magazines, t-shirts, screen prints, etc.) but he runs a great blog. Everything seems top notch but don’t just take our word for it. Check it out for yourself.

This is an amazing audio App. Sort of midway between an old-timey arcade game Ã  la Pong or Asteroids and…maybe some sort of sampling engine?  Totally weird. Basically, you construct a maze containing any number of obstacles. Balls are then dropped into it. The balls move around and ricochet off of obstacles, triggering vocal samples in the process. (There seems to be pretty much no way of predicting what sample will be produced by a given obstacle and position. You just have to experiment.) The graphics are simple and the motion of the balls is a little jerky but the whole thing is totally addictive. Seriously. We haven’t gotten hooked on anything this quickly since they opened up that breakfast burrito place down the street.

Sometimes you just need some classic R&B in your life. Not just sometimes. Often. Maybe it’s because you’ve just lost the love of your life. Maybe it’s the end of the week and you’re tired; you need something to take your mind of work. Or maybe it’s because you’ve been driving for a really long time and you know this really good college radio station but you can’t seem to get it on your radio because their transmitter is so weak and also it’s your car’s fault and what the hell why didn’t you just replace the radio when you bought the car but now it’s too late because you’re probably not going to hold on to the car for that much longer anyway. We don’t know what it is that keeps us coming back but we know a good thing when I hear it.

Just sitting back, sipping my coffee, and listening to the soothing sounds of …disappearer… They’re playing in Providence tonight at Easy Axxess which seems to be a new venue / showspace. Tonight’s tinyshowcase 4-pack is most delicious. This one in particular I like:

Eh? It’s by Nigel Peake. For more of his stuff check out his online gallery.